The term applies to a wide range of guidelines that have been adopted to consciously minimize or eradicate pollution in the environment.

The countries that make this list are notable for waging war on toxic substances.

They have made it a healthy choice to conserve water, energy and try to eradicate or minimize air, land, and water pollution.

The world’s most sustainable countries are located in Europe and graded according to EPI.

EPI, or Environmental Performance Index, is a ranking system used to classify countries based on their efforts to preserve the earth’s natural ecosystem.

It acts as a means of measurement of these countries’ environmental policy success.

This index is taken from the scores of each country’s performance indicator of the quality of life. Some of these indicators include sir quality, water quality, animal life preserve, etc (source)

Here are 10 of the most sustainable countries in the world, and why they are sustainable:

Located in Northern Europe, Denmark is no doubt one of the greenest countries today.

With an amazingly high Environmental Performance Index of 82.5, Denmark safely secured a spot as the most sustainable country in the world today.

It is today one of the countries with outstanding scores in biodiversity and air quality.

Denmark has established and sustained a very eco-friendly culture and established policies to teach its citizens to take more care of planet earth.

These policies, for one, aim at effectively reducing the greenhouse effect and achieving a goal of fossil-free energy production.

Luxembourg is a mostly rural, and dense small European country bordered by Belgium, France, and Germany.

This small country, however, ranks high as the second most sustainable country in the world.

Boasting an EPI of 82.3, Luxembourg has managed to sustain high scores in biodiversity, habitat, and water resources.

It achieved this by setting policies for a smooth transition towards a carbon-neutral economy, better land use preservation, prevention of the loss of natural habitats, and aiming for better climate change.

Switzerland is a scenic, mountainous country located in Central Europe.

With an Environmental Performance index of 81.5, Switzerland has managed to be termed the third most sustainable country in the world.

Switzerland has been strongly dedicated to maintaining and developing sustainability in the past few years.

It has managed to do this by putting in place several policies like the foreign economic policy, international cooperation, and sectoral foreign policies.

Switzerland encourages the use of eco-friendly goods and services, aiming to make the country a better place one recycle at a time.

The U.K. recognizes the need for a healthy, clean, and safe environment and achieves its sustainability goals on four broad objectives:

Unsurprisingly, the U.K. holds a perfect score of 100 for immaculate sanitation. It also has in place policies to push the gradual eradication of fossil fuel to reduce carbon footprint.

France has an Environmental Performance Index of 80, coming in fifth.

It boasts of rather good scores on water sanitation and the absence of air pollutants.

It is worth noting that France has put in place initiatives on recycling clothing, throwing away food, installing hydro turbines for cleaner power, recycling used plastic, ridding the roads of old polluting cars, and has put in place policies to aid its “fossil-free” journey.

Located in the East Alpine country in the southern part of Central Europe, Austria has an EPI score of 79.6.

Austria has explored various efforts to make sure its environment remains eco-friendly.

It engages in organic farming and has employed strict air quality standards, monitors the quality of water, owns an impressive sewerage connection rate that reaches up to 85% of the family population, and pesticide regulation policies.

Finland has an Environmental Performance Index of 78.9. This is helped by its relatively low population density and mostly unspoiled natural environment.

It invests in and prioritizes renewable energy, protection of natural habitat, and better climate change.

Coming in close with an EPI score of 78.7, Sweden stands as the eighth-most sustainable country in the world.

Sweden possesses the highest percentage of renewable energy in the world.

Having cut down its use of fossil fuel, it strives to be the first fossil-fuel-free country by 2050.

Sweden has put policies in place to put a rein on food disposal, recycling, and a better climate.

A close neighbor with Sweden and Finland, Norway has an EPI score of 77.7. It has put in place several policies and initiatives ranging from recycling to water sanitation.

In Norway, nothing goes to waste. From plastic to food to waste materials, It boasts of one of the most efficient recycling initiatives in the world.

Norway has a mind-blowing score of 100 on sanitation and drinking water and ranks fifth for air quality.

Germany with an EPI of 77.2, is no doubt one of the most sustainable industrial countries in the world.

It has policies in place to encourage the production of renewable energy and the reduction of greenhouse gas emissions by at least 55% by 2030.

It has begun to place more emphasis on resource-efficient products and services.

Countries have begun to understand the need for a healthier environment and have put in place efforts to aid the ‘healing up’ of nature.

It is important to have a sustainable future for a better and healthier tomorrow. 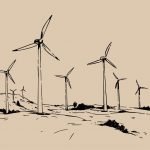